How Dogecoin Became Much Popular 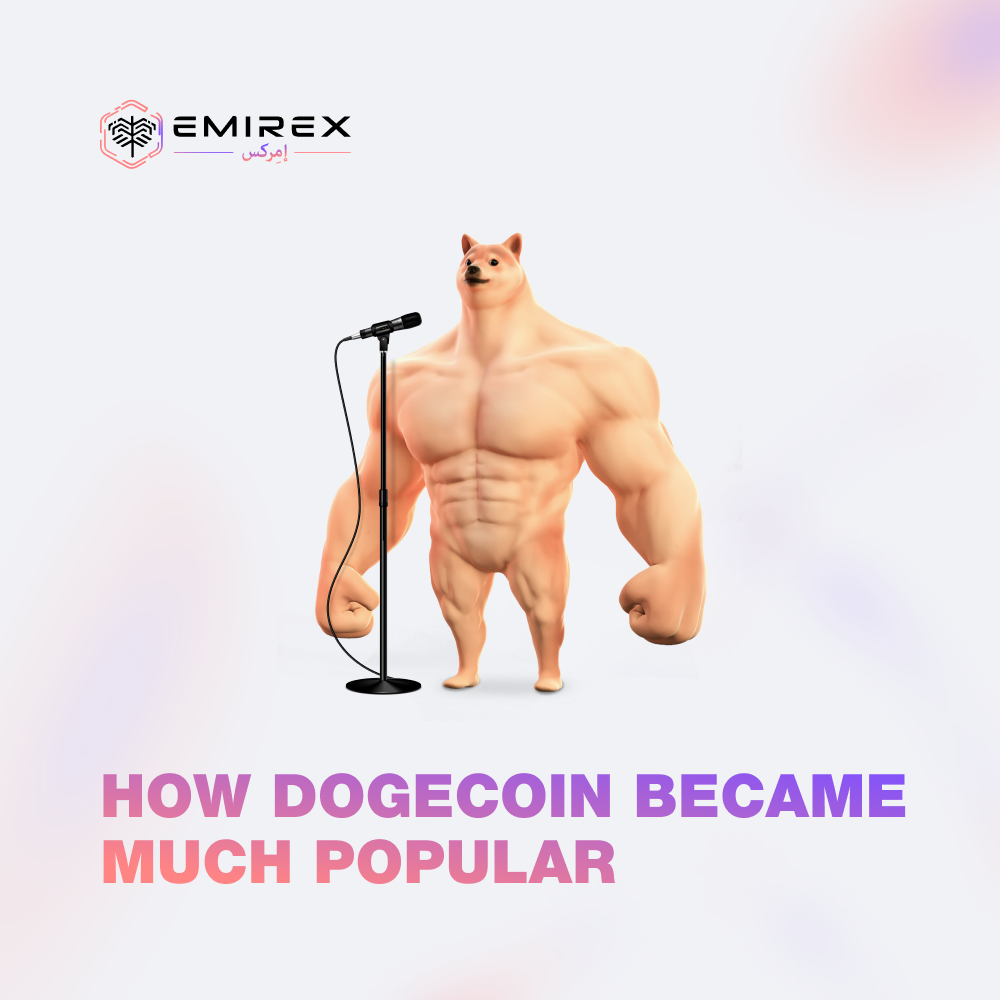 Where Did Doge Come From?

Dogecoin is the trendiest and most bizarre cryptocurrency on the market. After Elon Musk endorsed the cryptocurrency, the price of Dogecoin, which is based on the ‘doge' meme, skyrocketed. Dogecoin began as a joke cryptocurrency but has now grown to have a market value of $54 billion and a massive global fanbase. How did that happen?

In late 2013, Adobe Product Marketing Manager Jackson Palmer and software developer Billy Markus invented Dogecoin, a meme cryptocurrency. The two set out to make the project as ridiculous as possible, basing it on a famous internet meme of a Japanese Shiba Inu "doge" saying incomprehensible meme words like "much wow" and "such tired."

Another of the co-founders' ridiculous decisions was limiting the total supply to 100 billion coins to make dogecoin unattractive as a cryptocurrency so that it didn't become serious. The supply limit was eventually lifted to encourage the use of the coin and prevent hodling.

Dogecoin was forked from Lucky Coin – a fork of Litecoin, which is a fork of Bitcoin – because Lucky Coin had a random block reward schedule where miners could receive zero or potentially thousands of free coins for producing new blocks.

Palmer and Markus included this feature in Dogecoin in the hopes that the unpredictability will upset doge miners and discourage them from utilizing the token as a long-term payment solution. However, just one month after the project's inception, the official Dogecoin website had over a million visitors and had swiftly gathered a sizable fanbase.

As the number of users continued to expand rapidly, the block reward schedule was firmly altered to a fixed one, similar to bitcoin's and most other cryptocurrencies, in March 2014 to make it more practical.

Dogecoin was a joke currency that didn't take itself seriously.

On December 6, 2013, Dogecoin went live for the first time, and it was an instant hit with the community. It was not only a funny cryptocurrency that could be readily mined and bought for fractions of a penny, but the outrageousness of its inception was a breath of fresh air for those who just wanted to play about with cryptocurrencies without any restrictions.

Despite China's announcement at the time of a prohibition on payment firms interacting with Bitcoin, the r/Dogecoin Reddit channel had over 19,000 subscribers within two weeks, and DOGE's price had risen 300%.

The community was shaken by its first big hack on December 25. A hostile attacker hacked into DogeWallet, a third-party Dogecoin wallet service, and stole 11 million doge (worth roughly $12,000 at the time), dubbed "the Dogecoin Christmas hack." “The attack began from the hacker getting access to our filesystem and altering the send/receive page to transmit to a static address,” according to the official statement from DogeWallet members.

Two days after the attack, a community-led campaign named "SaveDogmas" was launched to compensate victims of the breach. Despite the fact that they were just founded a few weeks ago, the "shibes" group banded together and donated 15 million doge to the SaveDogmas wallet. In the year that followed, this act of charity would become a fundamental distinguishing trait of the Dogecoin community.

Is Dogecoin a Good Investment?

The Dogecoin community was anxious to demonstrate that the meme-based cryptocurrency had real-world use in 2014, so they started raising cash through DOGE contributions to support a variety of athletic and philanthropic organizations. The first saw the community collect $30,000 in only a few hours to assist send the Jamaican bobsled team to the 2014 Winter Olympics in Sochi, Russia. The article was picked up by many major news sources, including Business Insider, The Washington Post, and The Guardian, and helped to spread the word about the meme coin initiative throughout the world. DOGEdaily transaction volumes temporarily surpassed bitcoin and every other cryptocurrency (in US dollars) by mid-January.

In the same month, a Washington Post article about an Indian Luger named Shiva Keshavan was shared in the Dogecoin Reddit channel, detailing his desperate need for funding to compete in the 2014 Sochi Winter Olympics after his home country was suspended by the International Olympic Committee for corruption. Within 24 hours, the Reddit community had collected over $7,500 in DOGE, allowing Keshavan to enter the competition.

The Story of Doge

On March 11th, 2014, the Dogecoin community donated $50,000 to a charity: The Water Project in Kenya that is building clean water infrastructure. The generous donations enabled the non-profit organization headquartered in the United States to construct two new water wells in the region.

On March 17, 2014, a Nascar driver named Josh Wise was attempting to acquire sponsorship to compete in the Talladega Superspeedway event. Once again, a post in the r/Dogecoin Reddit channel invited the community to put their doge to good use and become the primary sponsor of Wise's car. In total, almost 67 million doge worth $55,000 were contributed. The automobile, dubbed "#98 Moonrocket," was adorned with the famed Shiba Inu meme and served as the first tangible advertisement for the project during a major sporting event.

DogeTipBot, a third-party tipping tool that interfaced with Reddit and allowed users to send dogecoin microtransactions to each other in exchange for posting pleasant content, was also launched in 2014. This service was critical in boosting the early adoption of doge, as well as introducing non-crypto users to digital tokens for the first time. With over 70,000 sign-ups by August, DogeTipBot has become the crypto industry's largest tipping service.

Josh Mohland, the developer of DogeTipBot, came to Reddit in 2017 to say that he had gone bankrupt, was shutting down the business, and had spent all the doge stored on the platform to fund operational costs and his obligations.

An increasing roster of celebrity endorsers who often declare their support for the Shiba Inu-themed cryptocurrency on social media has also contributed to dogecoin's worldwide appeal in recent years. Carole Baskin, the actress of Netflix's "Tiger King," Gene Simmons, former professional bodybuilder Kai Greene, and American rappers Snoop Dogg and Lil Yachty are among others on the list.

Elon Musk, the CEO of Tesla and one of the world's richest men, is the most well-known celebrity supporter of dogecoin.

Musk followed with another doge-related post in March 2020, writing, "Dogs rock... they have the best coin," and four months later, he tweeted a dogecoin meme with his 46.9 million Twitter followers with the phrase "it's inevitable."

Musk continued to tweet about DOGE at the finish of 2020, prompting prices to rise by 25% around December 20 after he wrote "One word: DOGE." He even joked that dogecoin may become the official currency of Mars one day. The "Elon effect" refers to Musk's power to substantially affect the crypto market through social media tweets.

During the WallStreetBets stock market mania that overtook traditional financial markets in January 2021, Musk pushed dogecoin prices soaring 800 % to a high of $0.08 by posting a picture of a doggy on the front of a "Dogue" issue. He exhibited the Elon effect once more on April 15 when he tweeted a snapshot of a famous artwork titled "dog barking at the moon" with the caption "doge barking at the moon."This had an immediate impact on dogecoin's price, which jumped 260 percent to a new all-time high above $0.45.

So, what made Dogecoin so popular? In conclusion, it appears that the project's humanitarian community, lighthearted origins, and real-world value were the most important factors in dogecoin's early success in the crypto market. Dogecoin, on the other hand, has grown into a type of cryptocurrency avatar for meme culture in recent years, fuelled by online groups and backing from internet stars like Elon Musk. DOGE has increased in value as that culture has grown in prominence, basically taking on a life of its own that its founders never planned. If you don’t know how much to invest in DOGE, a meme coin, we understand — No one really knows. Use a dollar-cost averaging investment method to protect yourself and never invest more than you can afford to lose. Emirex wishes you the best of luck on your trades!