Bancor (BNT) is An On-chain Liquidity Protocol. On 15th September Bancor (BNT) was listed for trading on the Emirex exchange.

Bancor is a decentralized liquidity network that allows users to convert various tokens without intermediaries. This is possible thanks to the use of reserve currencies, which allow automatic and algorithmic pricing regardless of the trading volume. The system also includes built-in liquidity for added convenience. The ultimate goal of the project is to make smart tokens a legal currency, that is, to create a standard that will unite all cryptocurrencies into an autonomous decentralized liquid network.

The Bancor protocol uses what it calls "connector" modules. They keep the balances of different ERC20 tokens in a smart contract. Bancor's formula is constantly recalculating prices to maintain a balance between connectors and smart contracts.

Bancor simplifies the tiered conversion system across exchanges and exchanges to a simple peer-to-peer system For this, its own cryptocurrency BNT has been developed, which acts as a reserve for all other tokens. This solution provides high liquidity in the exchange and no need for a counterparty - all transactions can be processed by the system itself. BANCOR Network Token is the center of the network. It was launched in June 2017 and since then users can freely convert any token to BNT or vice versa within the network with it. The main purpose of the Bancor crypto coin is to be an intermediary for the conversion of tokens among themselves. The Bancor formula is used to calculate the speed of these conversions.

The Bancor conversion principle comes down to the following algorithm:

With such a system in mind, Bancor can offer an exchange of Ether tokens without commissions or spreads. At the same time, the volatility of digital money decreases due to the internal stabilization of the exchange rate.

Bancor protocol compliant tokens have a non-commercial, built-in market maker. There are two different types of these compatible tokens. Smart tokens have a single slot (or BNT) that has a user-configurable weight. Users launching new tokens will make them Smart. Bancor's formula always works to maintain the same ratio between the value of the tokens connected to the Smart Token as well as the Smart Token itself. To do this, it adjusts prices for sales and purchases in real-time. These smart tokens allow converting without the need for the parties to agree. So there is no counterparty risk and liquidity is not related to exchange listing or trading volume. 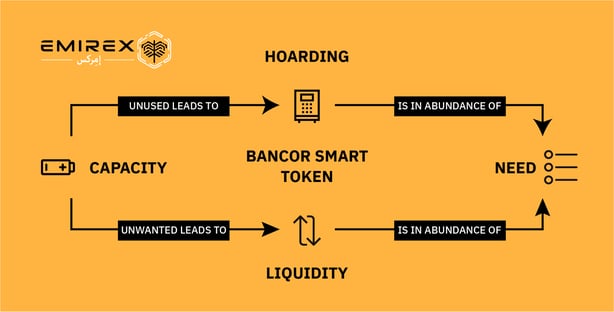 Another option is a Relay token that contains two connectors. This includes any ERC20 standard along with BNTs, each with a 50 percent weight. This allows backward compatibility for existing tokens that users want to convert on the network.

After the release of V2, the team is working on an "aggressive roadmap" to launch the BancorDAO and release BNT Liquidity Mining. It is also integrating tools that let token projects deploy liquidity mining programs of their own on both v1 and v2 pools.

Bancor developers strive to simplify the use of smart contracts and Ether tokens. They pay attention to improving the architecture of their own cryptocurrency and optimizing the main tools of the system. In the near future, the plan is to improve security, as well as to expand compatibility with other blockchains. The system is supposed to create a liquid exchange network not only between ether tokens but also with other cryptocurrencies.

These factors make the investment outlook look promising. Bancor offers users a token exchange protocol with unlimited liquidity, which makes it in demand both for ongoing projects based on ether and for new startups. At the same time, experts emphasize the presence of technical risks associated with the implementation of the assigned tasks. However, the development team has already established itself and its project with a serious attitude towards the set goals. This factor once again emphasizes the prospects for long-term investment focused on the full development of the project as a new standard for exchange operations.