What Are the Most Popular Cryptocurrencies Besides Bitcoin? 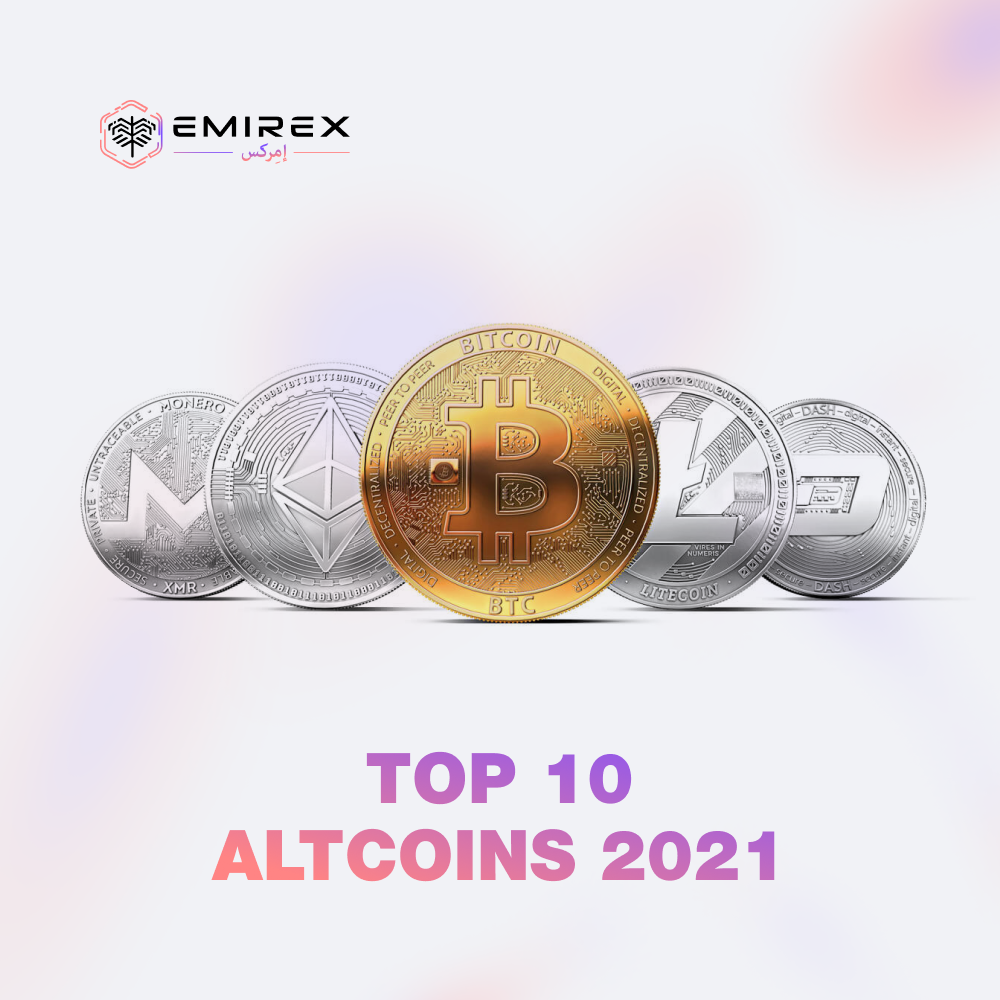 A cryptocurrency is a sort of currency that takes the form of tokens or coins on a distributed and decentralized ledger. Aside from that, cryptocurrencies have grown tremendously since the debut of Bitcoins well over a decade ago. The next successful coin may well be issued today. In terms of value, market share, and appeal, Bitcoin continues to dominate the field of altcoins. Altcoins, such as Ethereum, are already being utilized to build decentralized apps (Dapps)for people who do not have access to conventional financial goods.

Many altcoins got support because they have additional functionality beyond Bitcoin, such as the capacity to process more transactions per second or employ alternative consensus mechanisms, such as proof-of-stake. Although Bitcoin is regarded as a leader in cryptocurrencies, analysts use many methods to evaluate coins besides Bitcoins. Researchers, for example, frequently place a high value on rating cryptocurrencies in terms of market value compared to each other. We have taken this into account, but there are other factors for why a digital token might be next in line.

Ethereum, the first Bitcoin competitor in our ranking, is a decentralized software technology that allows smart contracts and decentralized applications (Dapps) to be written and executed without the influence of a trustee. The purpose of Ethereum is to establish a decentralized suite of financial commodities that anybody in the world, regardless of nationality, race, or ideology, may safely use. This element makes Ethereum much more appealing for individuals in certain nations if they lack government resources or an official identity to obtain bank balances, mortgages, coverage, and several other financial items.

Ethereum apps are powered by ether, the project's proprietary cryptographic currency. Ether functions as a means for navigating throughout the Ethereum blockchain and is primarily desired by devs trying to create and operate apps within the Ethereum, as well as buyers wishing to acquire other digital assets using ether. Ether, which debuted in 2015, is now the second-largest digital currency by market value behind Bitcoin, albeit it lags well behind the dominating cryptocurrency. In 2014, Ethereum announced an ether presale, which garnered a massive reaction, ushering in the era of the initial coin offering (ICO). Ethereum claims that it can be used to “codify, decentralize, secure, and trade just about anything.” Following the 2016 attack on the decentralized autonomous organization (DAO), Ethereum was divided into two coins: Ethereum (ETH) and Ethereum Classic (ETC). Ethereum intends to switch its consensus process from proof-of-work to proof-of-stake in 2021. This change will allow Ethereum's network to function with significantly less energy and faster transaction speeds. Proof-of-stake enables network users to "stake" their ether on the network. This procedure aids in the security of the network and the processing of transactions. Those who do so are rewarded with ether, which functions similarly to an interesting account. This is an alternative to Bitcoin's proof-of-work system, in which miners are rewarded with extra Bitcoin in exchange for processing transactions.

Litecoin, which debuted in 2011, was one of the first cryptocurrencies to follow in the footsteps of Bitcoin and has been dubbed the "silver to Bitcoin's gold." Charlie Lee, an MIT graduate, and former Google developer designed it. Litecoin is built on a fully accessible worldwide payments system that is not regulated by any centralized power and employs “scrypt” as a proof of work that can be decoded using consumer-grade CPUs. Litecoin is similar to Bitcoin in many aspects, except it has a quicker block creation rate and hence offers quicker transaction confirmation time. Aside from developers, there is an increasing number of shops that take Litecoin. Litecoin has a market cap of $10.1 billion and a per token value of $153.88, earning it the position of the world's sixth-largest altcoin as of June 2021.

Cardano is an “Ouroboros proof-of-stake” cryptocurrency developed by engineers, mathematicians, and cryptography professionals using a research-based methodology. Charles Hoskinson, one of Ethereum's five early founders, co-founded the platform. After a few issues with the way Ethereum was headed, he departed and eventually worked to create Cardano. Cardano's blockchain was developed through considerable testing and group research by the Cardano team. Upwards of 90 publications on blockchain technology have been published by Cardano specialists, covering many issues. Cardano's foundation is built on this study. Cardano appears to distinguish between its proof-of-stake rivals and many other significant altcoins because of this demanding procedure. Cardano has also been branded the "Ethereum killer," owing to its ability to do more. Cardano, on the other hand, is still in its initial phases. Although it has surpassed Ethereum in terms of proof-of-stake consensus, it still has a long way to go in decentralized financial applications. Cardano promises to be the world financial operating system by producing decentralized financial products comparable to Ethereum and delivering fixes for chain interoperability, voter fraud, and legal contract tracking, among several other issues. Cardano has a market value of $49.2B as of June 2021, with one ADA trading at $1.50.

Polkadot is a one-of-a-kind proof-of-stake coin that aims to provide compatibility with other blockchains. Its protocol connects both permissioned and permissionless blockchains, oracles, allowing systems to collaborate under one umbrella.

Polkadot's essential component is its relay chain, which enables network interoperability. It also allows creating "parachains," or alternative blockchains with their native coins for specialized use applications. Polkadot differs from Ethereum. Instead of only using Polkadot for decentralized apps, developers can also design their blockchains while using the Polkadot chain safety. Developers may create new blockchains with Ethereum, but they must establish their security mechanisms, which leaves novice and smaller projects vulnerable to attack. The larger the blockchain, the more secure it is. This is known as pooled or shared security in Polkadot. Polkadot was founded by Gavin Wood, another member of the Ethereum project's core founders who disagreed on the project's future. Polkadot has a market cap of $20.3 billion as of June 2021, and one DOT is worth $21.33.

Bitcoin Cash (BCH) is significant in altcoin history since it was one of the first and most successful hard forks of the original Bitcoin. A split occurs in the bitcoin realm as a consequence of disagreements and conflicts between developers and miners. Since digital currencies are decentralized: wholesale changes to the code underpinning the token or coin at hand must be made by broad consensus. The method for this process differs depending on the cryptocurrency. When parties cannot agree, the digital currency is sometimes split. The previous chain will remain faithful to its original code. The new chain will start as a new version of the preceding coin, along with code modifications. As a result of one of these splits, BCH was born in August 2017. The argument that resulted in the formation of BCH was over scalability. The Bitcoin network has a restriction on the size of blocks: one megabyte (MB). BCH raises the block size from one MB to eight MBs. The theory being that bigger blocks may carry more transactions and hence boost transaction speed. Other changes include the elimination of the Segregated Witness protocol, which has an impact on block space. BCH has a market capitalization of $11.01B and a token value of $588.60 as of June 2021.

Stellar is an open blockchain technology that links financial institutions with big transactions to deliver corporate solutions. Massive transactions between banks and investment firms, which used to take several days, involve several middlemen, and cost a lot of money, may now be completed quickly, with no middlemen and at little to no cost to the parties involved. Despite its positioning as an enterprise blockchain for institutional transactions, Stellar is still an open blockchain that anybody may utilize. The technology enables cross-border transactions in any currency. Lumens are the native currency of Stellar (XLM). To transact on the network, users must have Lumens. Jed McCaleb, a founding member of Ripple Labs and the creator of the Ripple protocol, launched Stellar(XLM). He subsequently left Ripple and went on to form the Stellar Development Foundation with his partner. As of June 2021, Stellar Lumens have a market capitalization of $7.80 billion and are priced at $0.33.

Chainlink is a decentralized oracle network that connects smart contracts, such as those on Ethereum, to data outside of the platform. Blockchains can’t securely link to external apps. Smart contracts may communicate with outside data via Chainlink's decentralized oracles, allowing them to be performed based on data that Ethereum itself cannot access. A variety of useful applications for Chainlink's technology are detailed on the company's website. One of the numerous applications described is monitoring water sources for contamination or illicit leeching in specific towns. Chainlink was developed by Sergey Nazarov along with Steve Ellis. As of June 2021, Chainlink’s market capitalization is $10.16B, and one LINK is valued at $23.57.

Binance Coin is a utility cryptocurrency that may be used to pay for trading costs on the Binance Exchange. Those that use the token to pay for the exchange can trade at a reduced rate. Binance Coin's blockchain also serves as the foundation for Binance's decentralized exchange. Changpeng Zhao launched the Binance exchange, one of the most popular in the world in terms of trading volume. Binance Coin was initially an ERC-20 token that operated on the Ethereum blockchain. It eventually had its mainnet launch. The network uses a proof-of-stake consensus model. As of June 2021, Binance has a $54B market capitalization with one BNB valued at $350.24.

Tether was one of the first and most popular of a class of cryptocurrencies known as stablecoins which decrease volatility by pegging their market value to a FIAT currency. The price of Tether is closely associated with that of the US dollar. The method enables users to make transfers from other cryptocurrencies to US dollars in a fraction of the time it takes to convert to regular cash. Launched in 2014, Tether describes itself as “a blockchain-enabled platform designed to facilitate the use of fiat currencies digitally.” Effectively, this cryptocurrency allows individuals to utilize a blockchain network and related technologies to transact in traditional currencies while minimizing the volatility and complexity often associated with digital currencies. Tether is the third-largest cryptocurrency with a total market cap of $62.4B and a per-token value of $1.

Monero is a safe, anonymous, and untraceable cryptocurrency. This open-source cryptocurrency was first released in April 2014. It quickly gained popularity among cryptography aficionados. The development of this coin is entirely funded by donations and directed by the community. Monero was created with a heavy focus on decentralization and scalability, and it uses a technology called "ring signatures" to provide perfect secrecy. With this method, a collection of cryptographic signatures appears, at least one of which is genuine, the genuine one cannot be identified because they all look authentic. Monero has gained a shady reputation and has been tied to illicit enterprises due to its security measures. While Monero is a good candidate for anonymous illegal transactions, the secrecy it provides is also beneficial to dissidents in authoritarian countries globally. Monero has a market capitalization of $4.5B and a per-token value of $251.62 as of June 2021.

Keep in mind that any cryptocurrency investment is very speculative. All those currencies have worth, but you are simply wagering their price at the end of the day. You are expecting that the investment will be worth more to someone else than it was to you. Make sure you are only investing money that you are willing to lose if something goes wrong, and as always, we wish you the best of luck trading!