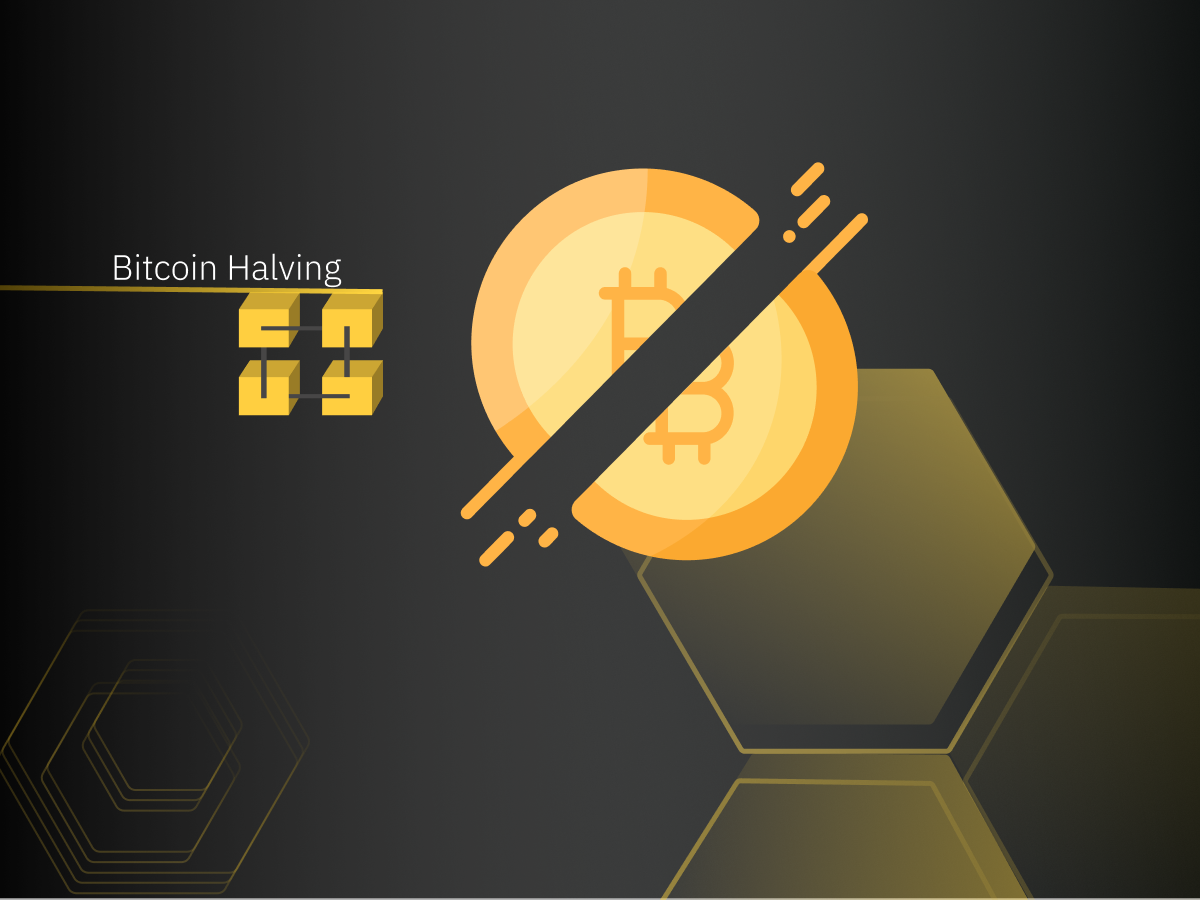 With the advent of the monetary system, the economy has faced various kinds of questions. Who is in charge of emission? How to control rising inflation? In the process of controlling fiat currencies, the Central Bank acts as a regulator. It is the Central Bank that decides the volume of emission. Central banks solve the economic problems of their countries and have the right to issue money but sometimes it will lead to the depreciation of money. All these challenges were taken into account when Bitcoin was created.

In digital currencies, a system is used where the network itself controls the issue of currency. Any user of the blockchain network receives a reward from the issued cryptocurrency for the creation of a new block in the network. To control emission and inflation, in the design of Bitcoin, a limit of 21,000,000 Bitcoins was introduced, which can be issued in total. Network users receive a reward for each block issued. The reward volume is halved every 210,000 blocks mined, which happens about once every 4 years. This process of lowering the reward by double is called HALVING.

When Bitcoin was launched on January 3, 2009, the reward for a block mined was 50 BTC, and the price of Bitcoin was less than a dollar. Before the first halving, the price at the beginning of 2012 was  5$, rising to 12$ on November 28, 2012 by the date of halving. In the post-halving period, the price skyrocketed to more than 1100$ during the year, although this rise can be explained by market manipulation and the Cyprus financial crisis. The first halving reduced the reward from 50 BTC per block to 25.

Let’s analyze the second halving on July 9, 2016, which reduced the amount of reward from 25 to 12.5 Bitcoins per block. After a long flat trend on prices, by October 2015, the price for Bitcoin was $300, and by July 2016 it was already $600. A year after the second Halving, prices grew to around $ 2,800 and continued to rise for another six months reaching $ 20,000. Although a sharp rise in prices in the post-halving period was also caused by a bubble in the ICO market, there is a similarity in price changes in the first two halvings.

The third bitcoin halving is scheduled for May 12th, which will reduce the amount of reward to 6.25 BTC per block. Pre-halving prices have not yet risen, as it was in the first two events, so it is difficult to say that the market reaction to the upcoming event will be exactly the same as in the previous two. Halving is a great controlling tool for emission and inflation in cryptocurrencies. This system used not only Bitcoin, but also other altcoins. 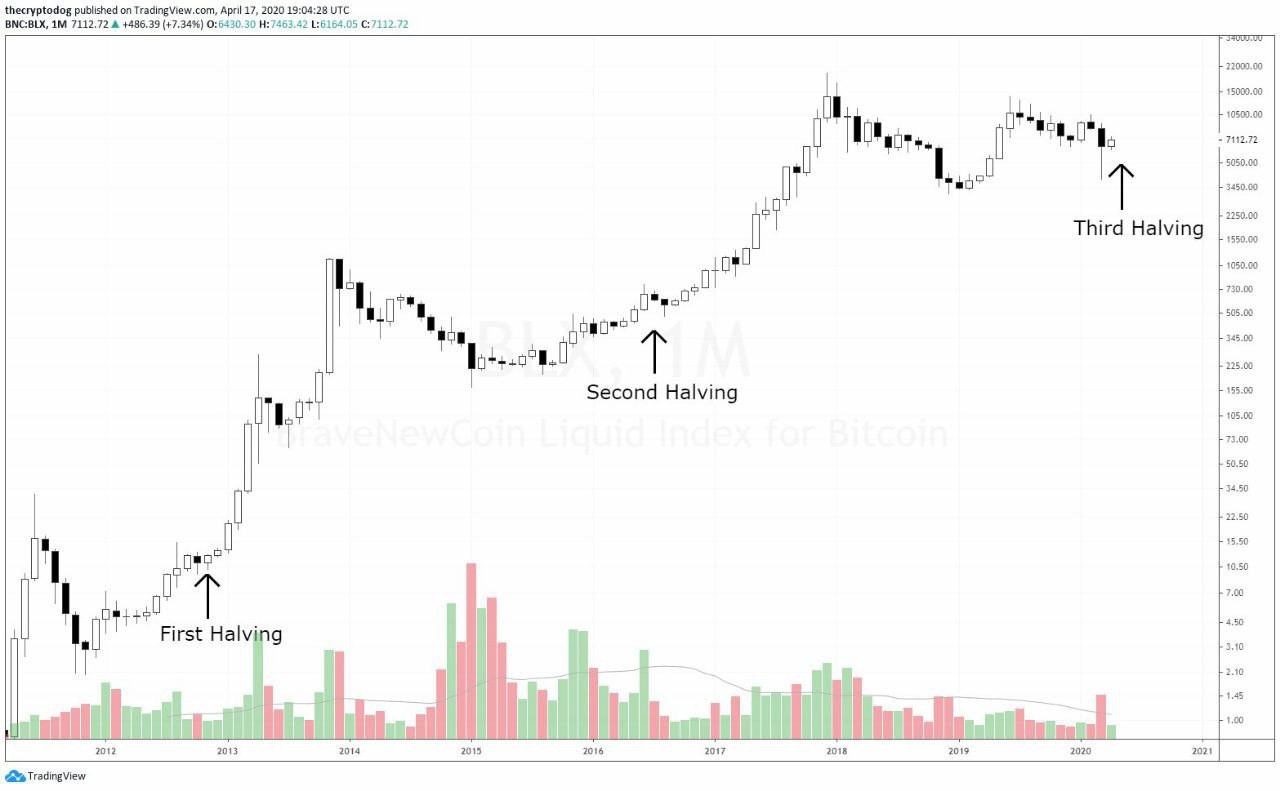 The halving system is also used in one of the Bitcoin Forks - Bitcoin Cash. Bitcoin Cash, being a fork of Bitcoin, at the time of separation had the same block reward as Bitcoin - 12.5 coins. BCH issued its 210,000 block on April 8, 2020, which caused rewards to go down to 6.25 BCH per block. Low volatility of prices from the trend cannot give an accurate analysis of the market at the moment. Most likely, more accurate data will be given within six months after the halving. But due to a decrease in the hashrate, it can be stated that a certain number of miners stopped working with this currency, although this phenomenon may be short-lived.

Litecoin was launched on October 13, 2011 as a fork of bitcoin. Litecoins halving takes place every 840,000 blocks, but the block is mined at a frequency of 2.5 blocks per minute, which is 4 times faster than Bitcoin, which is still around 4 years. Litecoin made his first halving on August 26, 2015, due to which the amount of reward for the block fell from 50 to 25 coins. Six months before the first Halving, Litecoin was trading at a price of about $ 1, and by July it had risen in price to $ 8-9, but after the halving itself, it fell again to $ 4. His second Halving Litecoin recorded on August 5, 2019, reducing the reward to 12.5 coins per block. Prior to halving, the price and hashrate grew in May 2019, reaching about $130, but shortly after the event, the price began to fall and by September fell to $ 55 per coin. Litecoin hashrate has also fallen. Litecoin currently costs around $ 43.

BSV is a coin that appeared as a result of separation from Bitcoin Cash in 2018 on November 15. BSV recorded its first Halving on April 10, 2020 almost immediately after the BCH halving, lowering the reward to 6.25 coins per block. Immediately after halving, a hashrate has decreased by almost 50 percent. The price of BSV has been rising a month prior to the event from $110 to $210, and next day after halving immediately fell to $185. It is still difficult to objectively analyze the situation and make forecasts because of the short period that has passed since the halving. 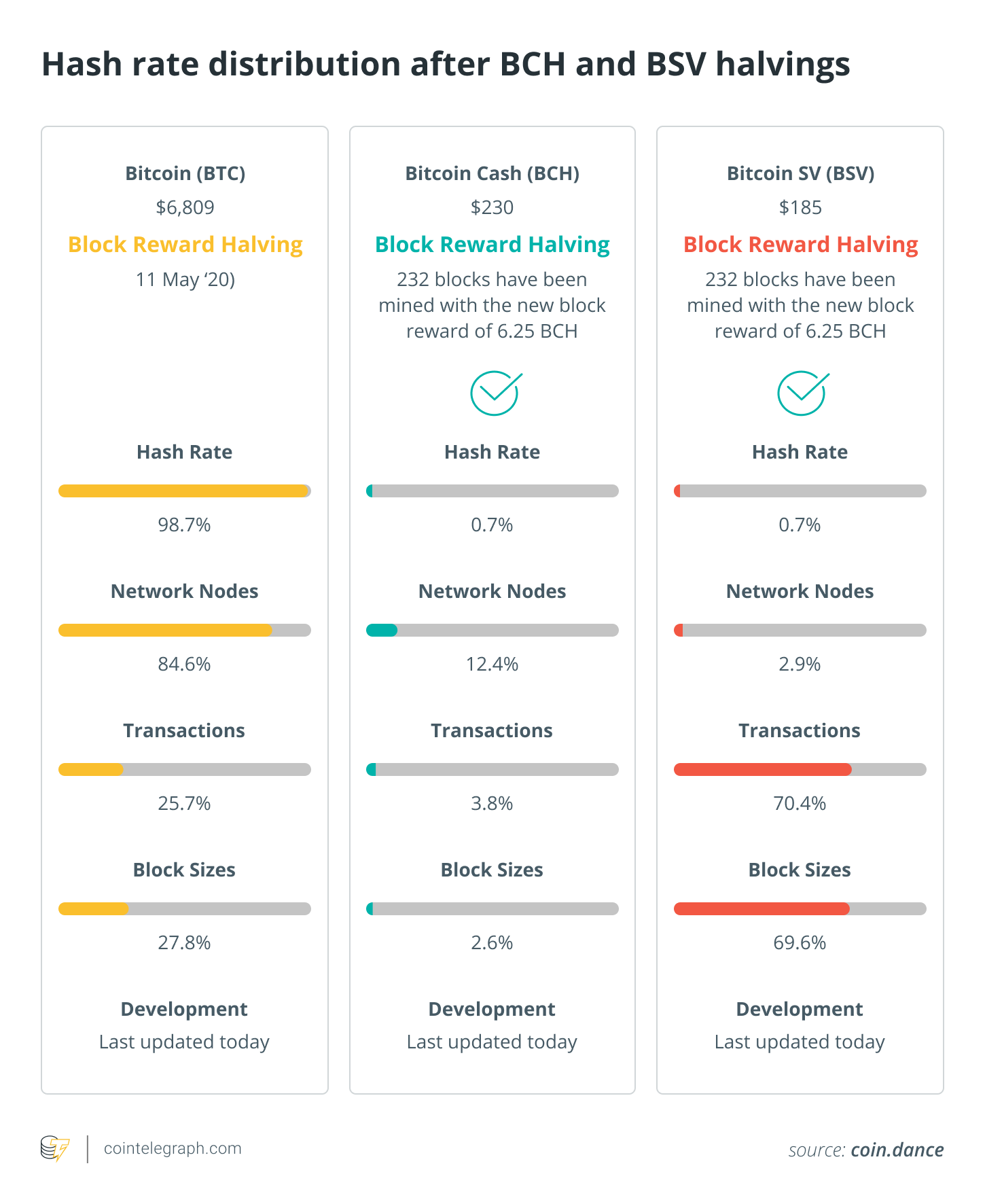 After the LTC, BCH and BSV halvings, a sharp decrease in hashrate was noticed in all coins, because mining is no longer as profitable as before. Also, prices also have been falling, after a sharp rise in the pre-halving period. The sharp rise in prices before halving, perhaps, was only a manipulation on the market, or psychological behavior of the buyers and sellers prior to the event.

It is very difficult to compare the above coins with Bitcoin. The capitalization and trading volume of Bitcoin compared to other coins is at least 10 times greater. It is now quite difficult to make predictions about market prices and changes in the Bitcoin hashrate volume, because the two previous halvings occurred on the background of other external factors such as economic crises and bubbles in the ICO market.

Also, it’s less likely that manipulation can occur on the Bitcoin market due to a large trading volume and high hashrate. It has to be noticed that other cryptocurrencies prices are depending on fluctuation of prices of Bitcoin because BTC still remains a major coin on the market.

In the future, after 4-5 halving, the volume of emission will decrease so much that mining will no longer be profitable unless there is a gradual raise in coin prices and an increase in mining technology efficiency, which will reduce the cost of expenditures for miners. Most likely, the current number of miners will decrease significantly, and the rest will earn not from receiving part of emission, but from commissions from the transfers.

Definitely, halving is a useful tool in the long-term regulation of cryptocurrency stability, but it also has its drawbacks. The whole cryptocurrency world will follow the next Bitcoin halving, which will take place on May 12th 2020 and will provide an opportunity to make a more clear analysis of the halving.